As we remember those who have died in war, this blog by our student, Pippa, gives us an insight into something of what it means to be a chaplain to all who face those risks in our armed forces today.

I should probably start this blog post with a confession, my poor reader. When I found out that my application for a placement with the Royal Army Chaplains had been approved, my imagination kicked into overdrive… In my head, the two weeks saw me with camo paint smeared across my face, with nothing but my wits and my sports bra keeping me from failure on some exercise. There I was, on the Brecon Beacons, wind-burnt but stealthy, as Jefferson Airplane somehow plays in the background…

You can probably imagine, then, my crash back to reality when I was told that I wasn’t allowed to undertake anything physically strenuous, as the insurance wouldn’t cover it.

I found myself instead at Beckett House, the beautiful ex-stately home which is the Armed Forces’ Chaplaincy Centre. It was here that we spent four days learning about what chaplaincy in the British Army looks like, with the ethics and morals upon which it’s based. Also during this time, we visited a local base, where we got to meet and chat to soldiers (from gangly 17-year old recruits, to the sturdier officers), specifically about what they thought of their Padres. What was clear – from both the classroom, and the boots on the ground – was that the Padres genuinely cared about the soldiers. Whether it was in the parental guise of asking how a young lad’s day was, or with a respect for appreciating how difficult a high-ranking role can really be, everyone agreed that the Padres were there (Haribo and cuppa in-hand) wanting to know if everyone was okay.

To which we can all give a comfortable smile, knowing that our troops are being cared for. But this is hardly a ground-breaking revelation: if this was it, the Army could have saved itself a lot of time by sending out a letter instead, stating:

‘Funnily enough, if you want to be a chaplain, you need to care about people. P.S. Yes you do wear the uniform, no you don’t carry a gun’.

Thankfully, (for both the quality of the placement, and for getting this blog post to the minimum word count), there was another nuance at play in a Padre’s work: the remarkable openness about death in military culture.

The emphasis on the topic of killing during the lectures at Beckett House was not particularly surprising: we, representatives of a faith that states ‘Thou shall not kill’, had entered into an institution whose primary purpose is to fight wars. What was surprising, then, was that this openness was just as present during my stint up at Catterick, where I was to experience a normal week on a normal base.

Of course, the fact that I was thrown in with the Infantry Training Centre is not incidental to this: should fighting break out, these are the troops who will see the horrors of war first-hand. Shadowing the Padres then, meant sitting in on lectures with titles like ‘The Realities of War’, where recruits discussed Marine A’s actions, or where teenagers were taught about suicidal tendencies and how to resist them. Seeing a Catholic priest lead around 20 paratrooper recruits in the discussion of who has the right to kill is something I still catch myself thinking about.

Because we Westerners have pushed death so far into the corners of society we barely talk about it. We barely know how to talk about it. Enter [stage right] the Church and the Army, with their language and familiarity of death. Death is hauled out of the shadows, and shoved blinking into the bright lights of lecture theatres. Please do not think I am being flippant – not about those poor souls who have died in uniform, or of the heart-breaking grief which the Church tends to – because it was clear this directness did not breed glibness. I couldn’t help but admire it all; the culture bred a maturity that knew it would be a waste to rage against our own mortality, yet it was clear that they certainly would not go gentle into that good night.

In fact, while death was talked about so freely, no reverence or respect was lost. If anything, it seemed to be gained: the weight of the reality was impressed upon everyone. I have never seen people remember with such clarity that they are dust, and to dust they shall return. And finally the penny dropped through my civvy naïveté as to why the Padres were so wanted, and needed, by everyone. Because while it doesn’t take any faith to understand that to kill and to die is something we naturally strive against, there was an implicit trust in the Padres that they would hold, on behalf of everyone, a belief in something deeper. A belief that the ending of a life is the gouging of God’s creation, no matter how justified. That when the Padre prays a recruits’ name, it really will do something. Yes, the Padres try to help when a soldier is having a bad day, but their presence is far weightier than a shoulder to cry on. Their being there, the crucifixes stitched onto their uniforms, is the promise that every person is loved, and should the worst happen, that we will remember them. 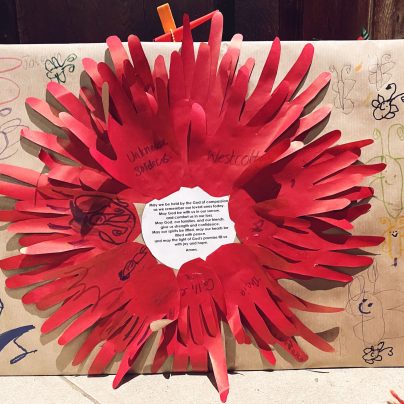